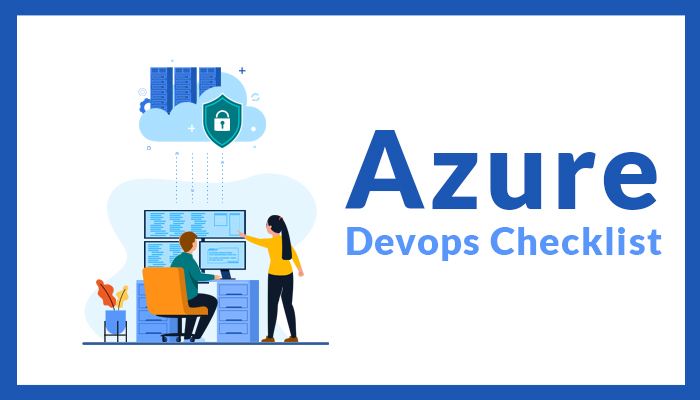 What is Azure DevOps Checklist?

When it comes to cloud computing, Microsoft Azure indeed comes into consideration by every expert. Microsoft has contributed a lot to shape the IT industry in the past years, including DevOps. Being among the most far-famed DevOps service, Azure has become the preference of numerous organizations. With that in mind, several teams spend tons of hours setting up and using DevOps. .

DevOps is an entire culture that requires the implementation of new practices, and efforts to meet the set goals. However, the primary task of implementing this culture is to reduce the software development lifecycle. As DevOps culture requires significant changes and following a checklist is undoubtedly a great way to navigate towards successful implementation. The article explains the Azure DevOps checklist and the ways how this checklist can help a DevOps expert.

Without a doubt, having a checklist is an excellent way of completing a task, especially if it is a complicated one, like using Microsoft Azure DevOps. Before you begin knowing about the entire checklist, it is essential to understand the reasoning behind this task. Here are a few reasons why you should follow an Azure DevOps checklist.

The entire notion of implementing DevOps culture in an organization is to decrease the software development lifecycle. Presently, the biggest competition is not just to deliver the most efficient and feature-packed program but to deliver it as quickly as possible. However, if implementing DevOps culture consumes a lot of time, then it is indirectly increasing the time to create a program. Using a DevOps checklist ensures that you know about the factors that should be kept in mind while implementing, ultimately saving a lot of time.

When there is an improper flow of work, the entire culture becomes chaotic. A checklist gives the user a clear path towards their destination, allowing them to be organized while working. The checklist will guide you on the actions you need to take to remain prepared for the next step beforehand.

No matter what the task is, it is bound to consume money if it is using the cloud. The longer the job takes to fulfill, the higher its overall cost becomes. By not only reducing SDLC through DevOps, but the entire DevOps implementation also saves a lot of time through a checklist which results in saving a lot of hefty production costs for the organization.

DevOps culture is the amalgamation of development and operations. The entire process comprises several parts naming culture, development, testing, release, monitoring, and management. The whole notion for this process segregation is to ensure smooth implementation of DevOps in an organization.

With this checklist by your side, you are sure to follow the right practices and processes. Rather than doing it on your own, it will act as a comprehensive guide for your Azure DevOps and ensure that the entire process remains smooth and steady.