What are the differences between DevOps and SRE? 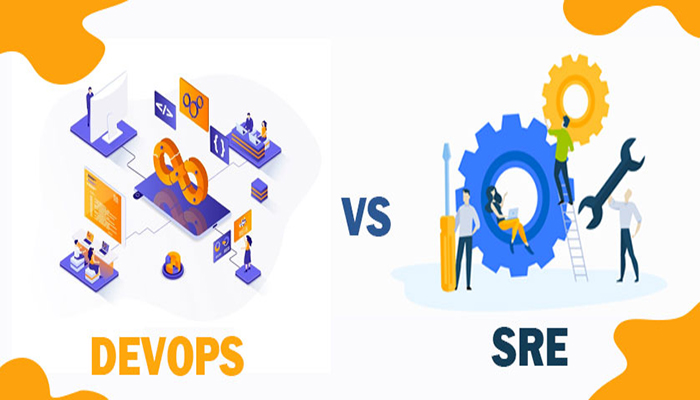 What are the differences between DevOps and SRE?

The past decade has witnessed the most massive changes and advancements in technologies. The IT industry has seen several new roles and expertise to make software development effective. However, there are two most heard terms by anyone who wishes to know more about IT, and those are DevOps and Site Reliability Engineering.

DevOps and SRE are both IT practices that have been ingested in the culture of almost every organization majorly due to their primary functionality i.e. decreasing the product release cycle. Both the practices have some common functions including automation, monitoring, and collaboration to aid the teams in building reliable software. Even though they may sound similar, there are plenty of differences that set them apart. This article explains all about DevOps and SRE and how they are different from each other.

DevOps is a culture implemented in an organization with a motive to enhance the software development lifecycle. When applied effectively, DevOps can help in creating the code stable and efficient. Moreover, it also aids in minimizing system failures, and security, hence reducing potential cyber threats. The culture works with the collaborative efforts of development, operations, and quality assurance which bridges the gap between the teams.

Unlike many practices, DevOps is majorly a never-ending process that continues its core functionalities like building, testing, and deploying through automation. Improving the delivery speed, reducing the SDLC, and enhancing the market need for responsiveness are the key goals of this culture. However, making IT operations reliable and effective through collaboration holds the top spot in DevOps’ goals.

Site Reliability Engineering (SRE) is not a new term. Being a framework for the developers to create large-scale software, SRE has successfully helped in achieving this goal. With constant changes in the culture, the present-day SRE consists of an expert team of developers who use engineering techniques to rectify problems in the systems. SRE is the perfect blend of operations, development, and engineering that handles the assortment of responsibilities like creating the code, shipping it, and production.

Traditionally, the role of the operations team was to maintain the software whereas software engineers were responsible for writing it. Both these teams had different approaches while working along with handling the issues. With the introduction of SRE, both collaborative efforts in solving the problem are implemented.

Differences between DevOps and SRE

Several organizations adopt a DevOps culture so that they can remove silos within operations and development teams. The development team desires to deploy the features upon coding instantaneously whereas the operations team prefers to take some time in maintenance of the systems before deployment. DevOps practices like breaking down silos between these two teams, configuration management, and infrastructure as code helps are solving such issues.

While SRE also accomplishes the same goal of eradicating silos, its way of functioning varies from DevOps. Rather than just searching for the methods to optimize the workflow within teams, it integrates into the team and assists developers in building effective systems. Moreover, SRE shares ownership of the systems with the developers and uses the same tools. As the team has the same perspective while working, the end product comes out reliable.

Automation is a significant part of every DevOps culture. Developers try to automate tasks as much as possible to keep the releases interesting. The majority of actions are done post-committing the code by the developer. Most of such activities are automated by the developers as well. For instance, automating the deployment of changes in the software or integrating work in the machine. In simpler terms, DevOps uses CI/CD for the enhancement of systems’ quality and velocity.

On the other hand, SRE uses the CI/CD approach, but for a different reason than DevOps. Here the approach is used to minimize failure cost. Tasks like backup, deployment and program restart are repetitive and complex that can consume a lot of time. Considering that fact, SRE can put aside a defined amount of time which aids in diminishing operational work. Even though practices like infrastructure as code, deployments, and canary releases are the same in SRE and DevOps, but the motive differs. In SRE, the motive of using these practices is to implement new tech, make the architecture better, or perform any other tempting task.

Without a doubt, to improve the current system, it is essential to understand how the existing system is working and that calculation is done by studying several metrics. DevOps mostly focus on the rapid and frequent deployments along with the frequency of issues faced in the system. In order to do so, DevOps considers metrics including the number of deployments, failed deployments, time taken from code commit to releasing, and recovery time. Moreover, feedback is an essential element to make the existing systems better. Studying all these metrics allows DevOps to improve the system quickly.

Dealing with failures is the core component of every IT culture. Before implementing any IT tech, it is essential to understand that there will be failures and they can never be eradicated completely. DevOps considers failure not as a letdown, but an opportunity to learn more. DevOps culture embraces failure and understands that it will always happen in the future. Here, the experts try to cope up with the failure rather than spending too much time and effort in eliminating fault from the systems. With that in mind, some cultures test their systems in a production environment while others take measures to test the same in a non-production environment through automation.

Site Reliability Engineering also embraces faults, but they break down the failure to determine its cause and how it can be avoided in the future. Creating the error budget is the key in SRE to understand the acceptable failure value. Here, SREs find out the time for which the system can be down. If the system is down within the set budget, it can be tolerable. However, if the system remains down more than the desired time, the future releases are paused till the solution is found.

DevOps culture is all about collaboration between different teams for software development and maintenance. Here, not just the developers, but ITOps engineers also work together to complete the tasks. However, that is not the case in SRE as it relies heavily on the mindset and tools of the developer to rectify ITOps issues. SRE makes use of just the engineer’s perspective.

More and more organizations are adopting the DevOps culture in recent years and the reason behind this adaptation is the immense benefits it offers. The following are the far-farmed perks of implementing DevOps in an organization.

The work of DevOps is not just limited to the development and delivery of the software. Instead, it is continuous work that includes testing, updating releases, and maintenance frequently. In other words, it is an undying process that will go on and on to keep the software stable and feature-rich.

DevOps culture is all about collaboration between different teams. While facing an issue, multiple brains from several teams function together to find its cause. Additionally, automated continuous testing and monitoring of the code aid in enhancing the code quality. All these collaborative actions help in the early detection of any underlying defect in the program.

SRE primarily helps in the development of reliable software systems, but its benefits are not just limited to this. Plenty of other benefits like better reporting, automation, and others are explained below.

Automation of workflow is among the core components of SRE. Not only it helps in hurdle-free workflow, but aids in detecting issues and vulnerabilities in the system, hence improving its overall reliability.

Quick delivery of software may bring along some bugs that may go undetected during the initial testing. If left unchecked, these bugs can affect the end-users that could be bad for the goodwill of the organization. Proactive troubleshooting by SRE teams makes sure that the final product is ready for release and is reliable, avoiding the hassle for end-users.

The core functionalities and features of DevOps and SRE are somewhat similar due to which explaining their differences is hard. The major difference between the two lies in the ways how they utilize their functionality. Both DevOps and SRE are focused on making the software development lifecycle better, DevOps is more about making the software better whereas SRE is inclined towards improving the reliability of the program.

Already, plenty of companies that have adopted DevOps culture have started to implement SRE as well and the reason behind this is to decrease the SDLC while making the software reliable. It could be said that both these cultures are two sides of the same coin and they work for the betterment of the software. It all comes down to the requirements and the way how the organization is planning to utilize them.